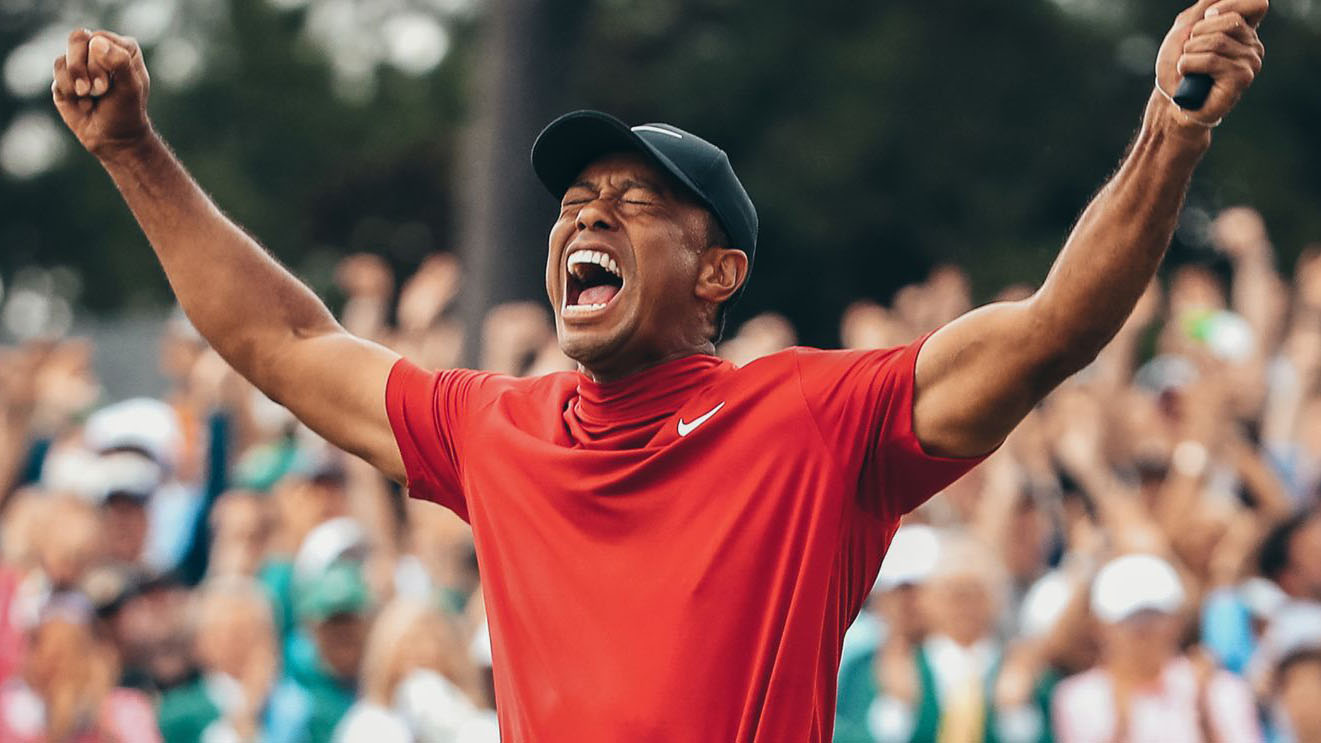 Tiger Woods steps up to the first tee at August National. Fans across the globe watching and waiting, hoping that he would win another Major Championship and a fifth green jacket. Tiger was in contention on the final day of the 2018 Open Championship at Carnoustie but fell short. At the Tour Championship he charged to the top of the leaderboard to end the 2018 season with an emphatic win. Tiger was returning to form, but many thought he wasn’t ready for the challenge of Augusta National. All except for two major sponsors, Nike and Taylormade, who were ready to capitalize on the potential of success.

Nike, who first signed Tiger Woods in 1996, has supported him through the highs and lows of both his personal life and professional career. Big brands such as Gatorade, AT&T, and General Motors all ended their relationships with Tiger Woods in 2010. Nike held steady while his golf game continued to unwind. Would the man they re-signed in 2013 for an estimated $200 million ever return to his former glory?

As Nike left the golf club market in favor of the apparel industry, Tiger was left without a sponsor for his clubs. Between 2010 and 2016, Tiger Woods had more missed cuts (14) than tournament wins (8). Prior to 2010, he had missed the cut only 5 times and amassed a staggering 70 wins. Despite his poor performance, Taylormade signed Tiger to a deal in 2017, not knowing whether he would ever be the Tiger of old ever again.

Nearly 100 hours later, with a tap-in putt and signature fist pump, Tiger Woods proved that he was back. Immediately, both Nike and Taylormade showed the support they had for him all along. It’s easy for a brand to take to social media for congratulations, as a twitter post takes all of 60 seconds to write and post. However these two brands had more in store. They understood how important it was to capture the Tiger-mania that was about to ensue.

Black Hat. Red Mock Turtleneck Shirt. Black Pants. Black Shoes. Tiger’s signature Sunday look hasn’t changed much in 20 years. With Tiger finally ‘back’, what golfer doesn’t want to shop to their own Sunday foursome in this sharp, iconic look? Nike immediately took Tiger’s win as a chance to sell this iconic outfit. Placed prominently on the home page, a picture of Tiger celebrating his 5th Masters Tournament win backdrops the slogan “Never Stop Dreaming”. Clicking the shop but takes the shopper directly to Nike’s extensive Tiger Woods collection, where the Nike digital team pushed the four key components of Tiger’s signature look to the top of their product listing. 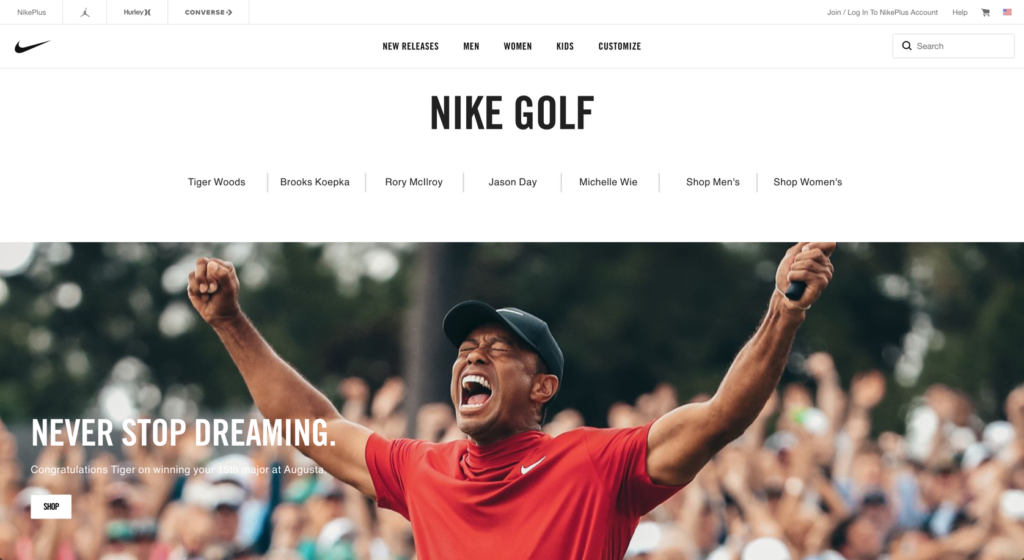 While strategically placed on the home page, the ‘Shop’ button can be overlooked. The more appropriate call-to-action should read ‘Shop Tiger’s Look’. When creating a call-to-action it’s important to remember what action you want the visitor to take. In this case, a shopper may confuse this shop option with the same shop experience for general nike golf gear.

While a few words likely won’t disrupt Nike’s goal to help drive sales of Tiger’s clothing line ,Nike missed a key opportunity to present each of Tiger’s coordinating outfits. Most golfers don’t have access to a wardrobe consultant. It’s this profession that keep PGA Tour golfers outfitted in coordinating clothes four straight days. Imagine Googling “Tiger Woods Saturday Master Outfit” to figure out what he wore, then cross referencing the Nike site to find the exact matching outfit. What a poor user experience.

Within minutes of his fifth Masters win, Taylormade congratulated Tiger on social media. So did tens of thousands of other people and companies. What stood out most in their post-Masters activities is the change to their website. Taylormade’s digital team was standing ready, on the weekend no less, to make good on their 2017 investment and partnership with Tiger. Golfers have always intrigued by which clubs a particular player is using. Is it the equipment or lifelong dedication to the sport that has made them so great? This feeling is shared by almost every amateur golfer around the globe, so it’s no wonder Taylormade was ready to cash in on the win. Taylormade moved the “Shop Tiger’s Bag” option to the home page, capturing fans in their immediate state of euphoria and excitement watching Tiger snap his 11 year drought between majors. 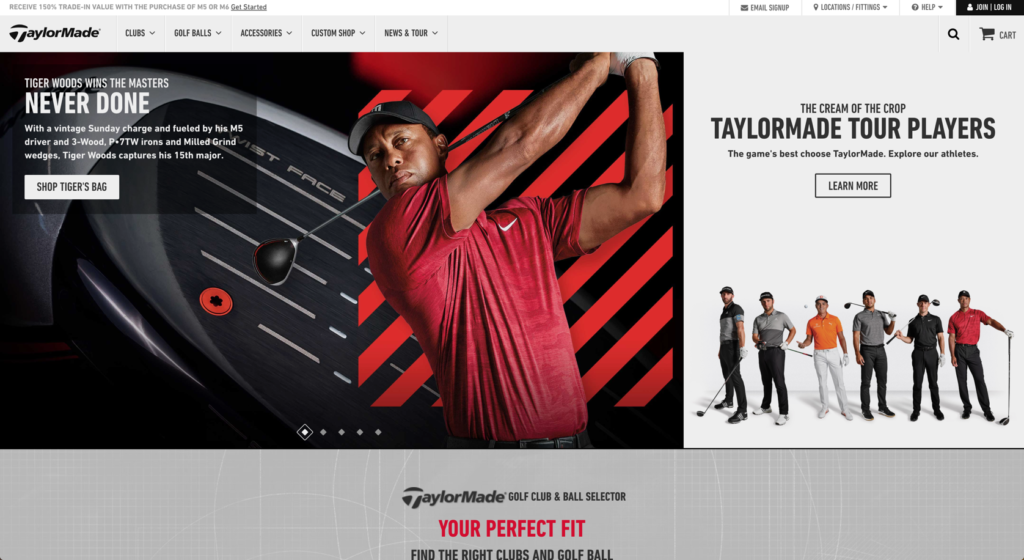 Be Comfortable to Go Outside The Box

Making Improvements to the Customer Experience

It’s important to keep in mind that thinking of new ways to achieve the same goals will set an e-commerce company apart from it’s competitors. In a commodity market, shoppers have many choices for a product and many more choices on where to get it from. It’s the consumer experience that creates a lasting impression on a shopper and ultimately determines their lifetime value as a customer.

Nike has an opportunity to help shoppers build their own unique outfit through a virtual wardrobe assistant. This assistant can recommend coordinating color combinations that are carefully curated by the Nike Design team, just as a professional wardrobe consultant would for a PGA Professional. When presented with a full, matching set of clothing, it’s easier for the shopper to order the complete set and subsequently increasing the average order value.

Taylormade also has opportunity to help shoppers create a custom product. Taylormade offers shoppers the option to customize a club before purchase. The average golfer is unaware of what most, if not all, of the configuration options mean. For example, when customizing a driver there are over 100 shaft options to choose from. Which one should they choose? Shoppers would greatly benefit from a Taylormade Virtual Fitting Assistant that asks specific questions, guiding the shopper towards an informed decision. Creating a product that performs well because it was tailored to the customer, creates an enjoyable experience and a happy customer.

For more on digital strategies and feature ideation, get in touch with us.